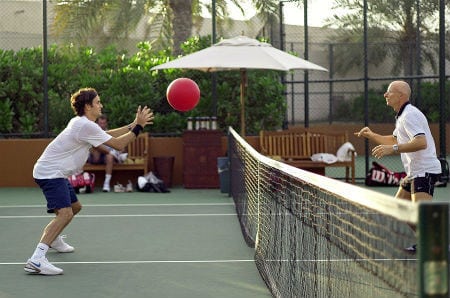 Some players spend hours and hours on court with minimum rewards.
Other players spend much less time training but their results are superior.

The players who train with a purpose and know exactly what they are working on and build a plan on how to improve that area and then execute that plan are the players who improve the quickest.

Many players show up day in, day out and work on the same things, train the same way and their progress is very slow.

I have been lucky enough to have been around top players training on a day to day basis and I have witnessed how each day these pros come out and train with a purpose and the improvements are massive.

When many players train they just knock up and down the middle of the court for a bit, hit a few volleys and smashes, then a few serves and play some points.
That is a typical set up of a session for players all around the world.
If a player has a technical problem or issue and they need to improve it, then that plan is not going to help them solve that issue and improve it.

Players need to know exactly what is wrong in their game, then build their sessions based around getting that better.

If you ask most players what is the part of your game that lets you down most will give you a pretty good answer.
However ask them same players what their plan is to get that better and most won’t have one.
Even worse are the players who don’t know what part of their games are weak.

Ask yourself a few simple questions if you can’t find your weaknesses:

1. What shot lets me down in matches?

2. What shot do I lack confidence in during matches?

4. Where am I losing the big points in matches?

Now that you know what part of your game needs help, build a plan on how to get it better.
My example is of a junior boy I work with. Let’s call him “Steve”
I watched Steve play a match and found that he gets very impatient when the point goes on for more than 4-5 shots. He would either go for a crazy winner, attack the net at the worst possible times or would hit an unforced error.
After watching the match I made a plan that in training we would work on two main things

1. Being patient and building the points in the correct way

2. Use his aggression and encourage him to attack in the correct way (when the time is right)

We did many drills based around 1-2 combinations from his serve and attacking second serves which gave him a chance to get better at being aggressive in a smart way.

All of these drills built up his game drastically.

So now it’s your turn, go and build your plan and get to work.

Now that you have found your training purpose and built a plan on how to improve your game you need to get out there and work on the weaknesses
Many players would rather hide their weaknesses from themselves and others rather than confront them. Those same players will still have those weaknesses for many years unless they are willing to change their attitude.

Also try to be flexible with your training, if your plan is not improving your game be flexible enough to change your plan.
Many players will keep on making the same mistakes with their training programs but are so close minded that they wont change it.

Now go and train with a purpose 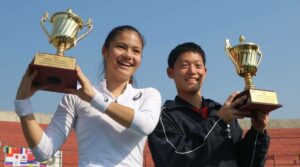